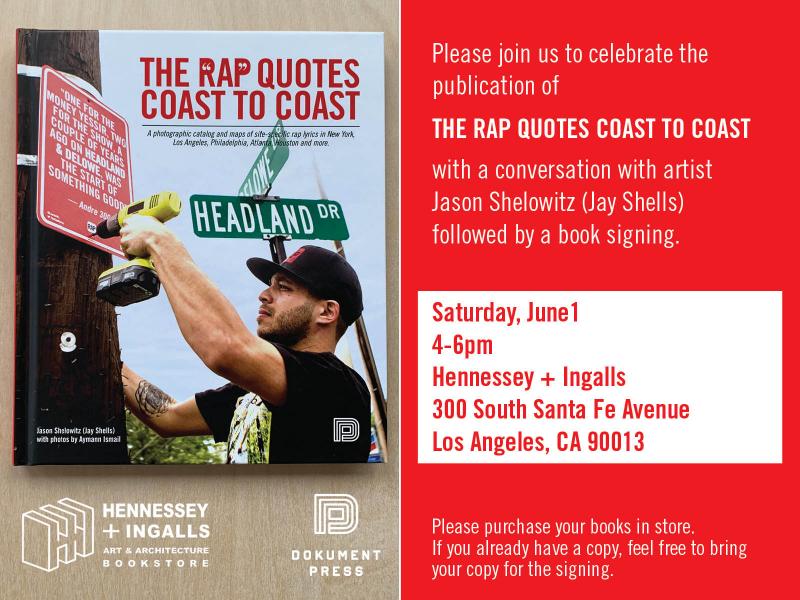 Join us Saturday, June 1st at 4:00 pm for a Book Signing with JASON SHELOWITZ (a.k.a. JAY SHELLS) for his new book: "The Rap Quotes Coast to Coast".

A visual catalog of site-specific rap lyrics in New York, Los Angeles, Philadelphia, Atlanta, Houston and more. With lyrics from Jay Z, Snoop Dogg, Andre 3000, Kanye West, Scarface and more. Since 2013, multi-disciplinary artist Jay Shells (Jason Shelowitz) has been travelling to major US cities, installing his Rap Quotes campaign. At the time of this publication, the campaign has touched down in New York, Los Angeles, Philadelphia, Atlanta, Houston and the Bay Area. Part art book and part guide book, "The Rap Quotes Coast to Coast" takes you on a new kind of journey, with gorgeous photography by Aymann Ismail to offer context for the hip hop lyrics that mark locations in these major cities. Each city/chapter opens with remarks by local hip hop journalists and ends with a map plotting every site-specific rap lyric for that city, giving the reader the ability to take their own hip hop-specific tour of the city they love. The Rap Quotes campaign is ongoing, and in the next few years will launch in Chicago, New Orleans, Miami and other cities around the globe.

Thanks for signing up!